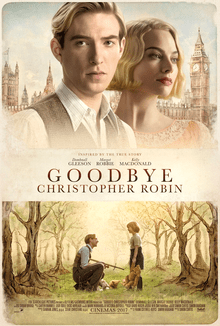 Goodbye Christopher Robin is the charming and imperfect story of the how the beloved companion we know as Winnie-the-Pooh came to be held in the hearts, minds and imaginations of a nation, from his beginnings in the shared imagination and relationships between Billy Moon, also known as Christopher Robin, his mother, Daphne, and father, the famed A.A. Milne.

This tale of creation – that of Winnie-the-Pooh, and of Christopher Robin, has a darker undertone as it tells of a boy whose extraordinary childhood leads him to an uneasy adolescence, and feeling compelled to regain his anonymity as an adult. Christopher’s efforts to establish his own adult identity, distinct from that cast for him as child, lead him, soldiering for his own cause, to the battlefields of the Second World War, which is wear the film begins. The spectre of war serves as a sobering background to the escapist tale of a child’s making – that of ‘Winnie-the-Pooh’.

When the Milne family turn in the big city in search of a quieter life, unwittingly, so begins the belated blossoming of a precious friendship between Billy Moon and his father as they escape into the woods and together build an undisturbed world of adventure and recreation, alongside a collection of affectionate animal characters – a blissful antidote to the hardened aspect of a war-bruised and seemingly unreflecting society.

Billy Moon’s innocence and his childly optimism is contrasted in the film with his father’s harrowing experiences in the trenches and his ever-looming memories of the Great War, his mother’s hardened exterior under the pressures, delights and expectations of London high society, and to the nation’s shared sadness and loss in the confused and unprecedented upheaval in the aftermath of war. In short, a very adult, ‘real world’ is contrasted to the child’s outlook, and to the wonderful world of Winnie-the-Pooh.

The space between Billy Moon’s infant world and that of his parents is cause for the amounted frustration and eventual resentment that Christopher feels as a young adult, having lived a childhood disposed and exposed to the demands of a marketplace. Mr and Mrs Milne are swept up in the tide of commercial success that ‘The Adventures of Winnie-the-Pooh’ receive, and Billy’s childhood experience is overlooked in the process. He becomes a prop on the national and even international stage that ‘Christopher Robin’ comes to occupy.

In a scene before Christopher boards the train to take him to war, he discloses his internalised anger to his father and at his father’s decision to sell the fruits of their happy young relationship, objectifying Christopher’s childhood in the process. Christopher’s hope is then to go to war to discover his own identity. His parents are left at home with their own consciences to grapple.

The film is a touching look at the unique circumstances from which grew Winnie-the-Pooh. The story offers encouragement to find peace in the simpler things and in nature, and is an important and memorable ode to the preciousness of childhood.